Our virtual PBX platform is your key to unlocking maximum profitability year after year! 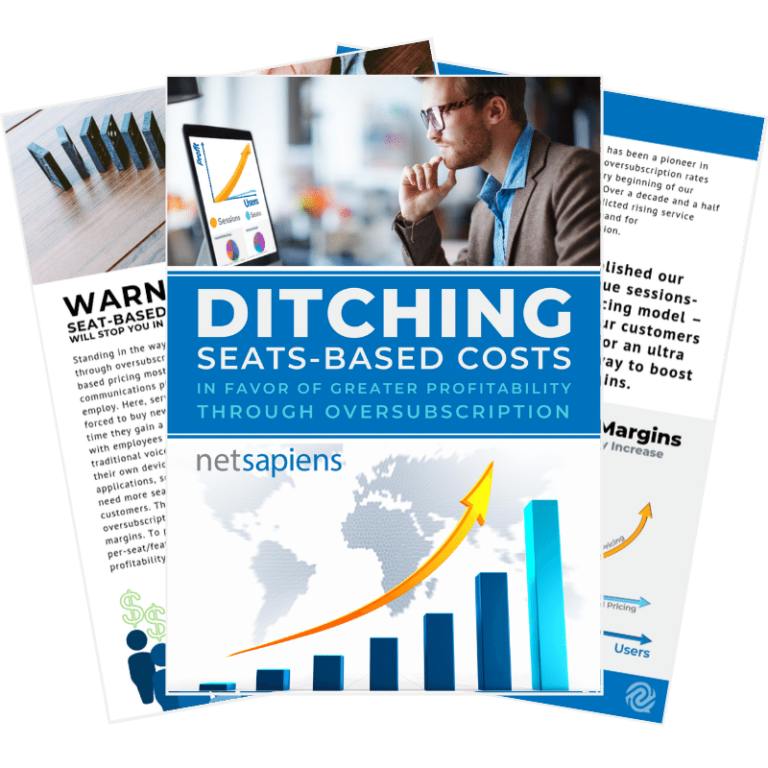 Oversubscription in the industry is becoming the norm. Whereas seats-based pricing models limit oversubscription thereby limiting a service providers selling power. We look at this and more in our new report. Download now and learn how you could be unlocking maximum profitability year after year.

Interestingly, with the advent of popular applications enabling real-time collaboration through mediums such as video chat and voice calls between computers, more individuals are less likely than ever to reach for an actual telephone.

As a result, this presents both a significant opportunity and a challenge for service providers.

First, the opportunity: oversubscription. Because people are now using alternate ways of communicating, service providers are seeing fewer active calls going out from among their end-users. For this reason, they should be able to put more people onto one SIP trunk and grow their profit margins through ongoing, increasing oversubscription ratios.

However, service providers are handcuffed into buying their UC solution on a per-seat/feature pricing model which their PBX platform vendor forces upon them. This model consequently forces service providers into buying a new license from their vendor every time they gain a new customer. Even though end users are using more Unified Communication applications than just their desk phone. Because end users are communicating differently, there has been a 19% growth in oversubscription rates in the industry (more on oversubscription below).

Service providers are waking up to this seat trap and have started shifting to a better pricing model to leverage the ever growing oversubscription rates. This disruptive business model of “session based pricing” facilitates oversubscription by allowing a service provider to use the same license for multiple customers. As a result, they can earn additional margin and revenue from each new seat/customer they sign without having to spend more on licenses they do not need.

Over a decade and a half ago, we predicted rising service provider demand for oversubscription. So we established our own unique sessions-based pricing model – to meet our customers’ demands for a powerful way to boost profit margins with an already powerful cloud PBX solution.

The true value behind NetSapiens ’ PBX platform is our sessions based pricing model that allows service providers to increase their customer base year after year on a fixed-cost license. This means that as your business grows so do your margins. Overall, sessions based pricing allows you to oversubscribe and maximize your ROI. Unlike seats-based pricing, which limits your selling ability and significantly reduces your market reach.

To understand oversubscription a little further, it helps to take a quick look back at history when landlines dominated the market. Yes, Ma Bell was successful in putting a phone in everyone’s home and office, but if everyone was to pick up a phone at the same time, the system would crash. Of course, this was the norm because telcos oversubscribed the system knowing that not everyone would be on the phone simultaneously. As recently as 1990, landline oversubscription was only three to one.

In 2016 the oversubscription ratio was 15:1. And today it is at 25:1, which is a 66% growth over three years, or a 19% compound annual growth rate (CAGR). This means that for every active call there are 24 other people who pay but are not making a phone call. In 2020, it increased 19% more when the oversubscription ratio became 30:1. Illustrated by the graph, with NetSapiens’ PBX platform‘s sessions based pricing model, our customers can sell up to 19% more customers every year – achieving higher and higher margins than seats based pricing models.

A One of a Kind PBX Platform for Service Providers

Not only does our pricing structure exponentially boost your ROI, but our future-proof technology and flexible API keep the latest and greatest features at your fingertips. Furthermore, NetSapiens’ n-Share technology gives Service Providers the peace of mind knowing that the data and processes from one PoP (Point of Presence) is being actively replicated and shared across all other PoPs in real time. Unlike other VoIP switch providers, we are here for you and we listen to your needs. But don’t just take our word for it, read what our customers have to say about us:

We researched many, many platforms and NetSapiens came out on top. We work with SMBs locally, nationally, and globally, NetSapiens has helped us grow into that. netsapiens understands the market. They understand the customers. Customers want the bells and whistles and NetSapiens has that.
RobertVoIP International
NetSapiens has allowed us to have a hosted offering that's carrier class where we're offering something with geo redundancy and all the bells and whistles. Our customers love it because they have the comfort of the reliability and all the new features - and does it at a cost where as a business owner we can be profitable. We really appreciate that.
RayOIT
We were looking for a replacement platform and NetSapiens had the right combination of features, performance, scalability, and obviously cost. I think that the Geo Redundancy is big for us.
AdamVersature
Previous
Next

Top Features Your UCaaS Vendor Should Have

Although VoIP can be considered the foundation of modern Unified Communications (UC) solutions, the idea of UC is far more encompassing. But, before you rush to invest in a UC solution, it is important to remember that not all solutions are alike. Below is a list of the top features you should look for in a UCaaS solutions vendor to make sure you’re getting the most out of your money.

How to Oversubscribe Your PBX

Through oversubscription, service providers should be able to add almost 20% more customers per year with no additional capital expenditures on their part. That's a big help. Because of that, in this blog, we look at how to oversubscribe your PBX and how that allows you, as a service provider, to keep additional revenue from new customers in your pockets.

Please fill out this form and we will be in touch!

By charging on a concurrent or active call basis instead of charging per-seat or per-feature you are able to strategically price your product for a maximum return on your investment.

NetSapiens’ n-Share technology gives Service Providers the peace of mind knowing that the data and processes from one PoP (Point of Presence) is being actively replicated and shared across all other PoPs in real time.

With NetSapiens, you have an all access pass to all of our solutions features and you can use the platform’s multi-tenant capabilities to selectively give your clients access to the features you want them to have.

This means that we are constantly innovating and improving SNAPsolution to be at the leading end of the industry’s standards.

With NetSapiens, YOU are in control. NetSapiens' communications platform pricing model and flexible API allow your business to thrive!